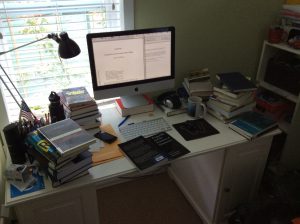 “How Ideas Frame the Politics of Climate Change: Discourse and Policy Development in the EU and US since the Paris Agreement”

The research project asks how ideas about climate change affect policy-making in their function as the foundation for justificatory and advocacy frames in processes on climate change governance. On a broader scale, the project speaks to three more general questions: How ideas and discourse matter for policy in the context of multi-level systems; how the politicization of public discourse affects governance beyond the nation state; and how the study of ideas and discourse can be integrated more convincingly into approaches and theories of policy-making and comparative political system analysis.

Empirically, the project focuses on the comparison between climate policiies of the EU and US  since the 2015 Paris Agreement, with a specific focus on their multi-level structure and their respective legislative institutions.

The research interest of the project is based on two main premises:

From this point of departure, the project investigates the following specific research questions:

In terms of theory, elements of framing analysis are combined with approaches from the policy analysis literature (particularly the Advocacy Coalition Framework) to develop and test hypotheses about the interrelation of ideas and discourse in the context of public controversy and the policy process.